Lovely, isn’t she? (Yes, the furry one above.) She’s Your 65-Million-Year-Old Mother. Through modern computer analysis and evolutionary data, Maureen O’Leary a researcher from Stony Brook University and her colleagues discovered the last known common ancestor of placentals (Scientific American). Modern placentals include animals such as whales, bats, humans, and rats to name a few, so this furry 6 to 245 gram mama, hailing from the dense trees of Gondwana, is related to us.

I can imagine several reactions now: 1) the breathless “Wow!”; 2) the skeptical “Really?”; 3) the gasping “Ew!!”; 4) the hair-flippin’ “I’m way prettier/handsomer*.”; and 5) the indifferent “Okay…I’m-not-too-interested-in-this-kind-of-thing-but-I-already-read-101-words-already-.” No matter which reaction, I’m glad we finally met our 65-million-year-old mother, but the budding question remains: how can we possibly be related to each other? We look nothing alike.

The answer lies in fossils and what evolutionists call homologous characteristics.

What are homologous characteristics or homology? Let’s first imagine a bat and a whale. The bat’s small weight of 0.4 oz is no match to the blue whale’s looming size of 120 tons. The bat soars with its wing appendages, while the whale dives with its massive flippers. 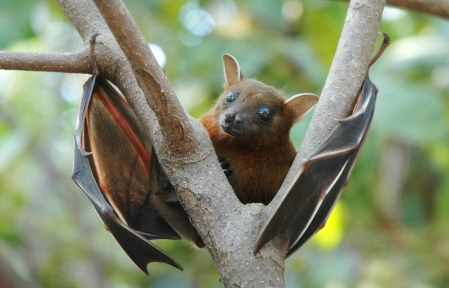 Humpback Whale that is full breaching.

At first glance at outer physical features, the answer seems to call out “no.” The bat and that whale are not related. If we look closely at their wings or flippers, however, a similarity begins to emerge. Beneath the flap of skin lies bone structures very much identical to each other, as depicted in the figure below.

The purple outlines the humerus, the orange the radius, the yellow the carpals, the green the metacarpals, and finally blue for phalanges. These similar bone structures are their similar characters, hinting that they possibly have a common ancestor. And, lo and behold, they do. It’s our 65-million-year-old furry mother from above again.

Some of us may have heard of the word homoplasy, but homoplasy is different from homology.

Homoplasy or analogous structures refers to similar characters shared between different species, but the character is not present or inherited in their common ancestor. An example is the bat and the bird. They both have wings, but internally and structurally, their bone characteristics differ greatly. The wings are derivatives of similar natural selection in similar environments, rather than of inherited and shared characteristics from their common ancestor. This is also known as convergent evolution.

Other examples of homoplasy can be seen in sharks and dolphins, and flying squirrels and sugar gliders. Check them out below!

Our site is run 100% by volunteers from around the world, and we thank you for visiting! Please help support us by buying us a warm cup of coffee! 🙂