Fantastic Beasts of Physics and Where to Find Them: Concave and Convex Lens

Fantastic Beasts of Physics and Where to Find Them: Educational lesson on thin lens physics

While our famous British wizard Newt Scamander arrived in New York City in 1926 with a suitcase of magical beasts and fantastic creatures, many of our friends from the roaring 1920s donned the most popular spectacles style and historical vintage prescription glasses during that time: the round frames. 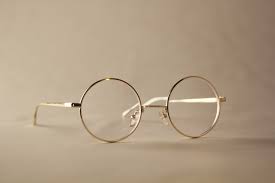 During the roaring 1920s, round frames was the most popular Western style for spectacles. Harry Potter, a young wizard and protagonist from JK Rowling’s fictional wizardry series, dons iconic round glasses that resemble the popular round specs of the 1920s.

Could it be coincidental that Harry Potter, hailed hero in the wizardry world and fictional protagonist from J.K. Rowling’s fantasy series, also dons these same round styled spectacles? We think not!

Harry Potter’s spectacles are certainly special. After all, without his glasses, young Harry wouldn’t be able to see too clearly. Blurry vision impedes a fiery fight against Death Eaters or a brave battle against He-Who-Must-Not-Be-Named.  So an important question remains: how does Mr. Potter’s glasses work?

Ladies and gentlemen, wizard, Muggle, or No-Maj, hop on board. Let’s learn about the lens of glasses and the fantastic physics behind them.

Lens are pieces of glasses that have curved surfaces, and when light strikes the surface, light rays either converge or diverge to form an image. Lens can include our glasses or even those on our cameras.

4. How Do We Calculate with the Thin Lens Equation?

For Lens: Images on the same side as the object are also known as virtual images. The i value is always negative.

Images on the opposite side of the object are also known as real images. The i value is always positive.

For mirrors: This is the opposite. Images on the same side as the object are real images.

Images on the opposite side of the object are virtual images.

Please note that we are referring to a general equation of 1/f = 1/i + 1/o that is used for both diverging and converging lens, in which our Summary Table below applies. Some people like to use two equations, depending on which lens they use. You may have used 1/f=1/o + 1/i for just convex or converging lens, and -(1/f) = 1/o – (1/i) for just concave or diverging lens. In that case, for concave or diverging lens, you no longer have to pay attention the sign values, and simply plug in the numerical values for focal length, object distance, and image distance.

5. How Do I Know if a Lens Image is Magnified or Not, upside down or upright?

The magnification equation is m = – i/o

Now, how do we know if the lens image is magnified, bigger or smaller, based on the thin lens equation? Good question. Plug in your i and o values, and take the absolute value.

If the absolute m value is greater than 1, then the image is larger than the size of the object.

If the absolute m value is equal to 1, the image size is the same size as the object.

If the absolute m value is less than 1, then the image is smaller than the size of the original object.

Let’s solve a wizardry and hypothetical example together:

Draco Malfoy and his cronies are back at it again. Running into the Slytherin gang, Harry Potter and his friend Ron defend themselves with flying spells and swinging wands. Malfoy shouts out “Everte Statum,” and the spell catches right into Potter’s chest. Thrown off his feet backwards, Harry skitters across the Hogwarts grass several feet. His spectacles falls off his face, and he loses his wand.

After a heated battle of flying spells, our half-giant half-human Hagrid butts in to save the day. Hagrid manages to separate Harry and Ron from Malfoy and his gang.

Squinting, Harry notices a giant hazy form walking towards him. As the man gets closer, Harry can see the man’s features more clearly – Hagrid’s classic brown beard and furry jacket.

1) Is Harry near-sighted or far-sighted? Based on the two most common lens type, what type of lens does Harry’s spectacles likely have – concave or convex lens?

Answer: Harry is near-sighted! He can see objects more clearly when they are closer to him. In this case, Harry recognized Hagrid’s face more clearly when the half-giant walked closer to the young Gryffindor. As for the lens type, since Harry is near-sighted, it is likely his spectacles holds concave or diverging lens. For people with near-sightedness or myopia, images from the object are focused in front of the retina. Concave lens for Mr. Potter can help correct image distance, and bring the image farther and onto the proper retina area.

Strength, or power, is found mathematically as 1/f in Diopters. Strength is the measurement of the optical power of a lens or curved mirror.   https://www.khanacademy.org/science/physics/geometric-optics/lenses/v/diopters-aberration-and-the-human-eye

Excellent question. Here in this problem, we are discussing a lens to retina distance for the image distance. In reality, without including the eye and only having the object and lens, a virtual image is always produced. The image distance is negative. However, in this case, we include the eye behind the lens and are using a lens to retina distance, which actually produces a ‘real image’ in our retina. The i value is thus positive. Additionally, the f focal length thus refers to the focal length within the eye rather than a focal length in between the lens and object, in which the f value is positive. If this was a regular problem that did not involve the eye, certainly the focal length’s f value for diverging lens would be negative.

7. Physics Simulation: on Image Projection with Concave and Convex Lens

Have a try on our educational physics simulation with lens! This educational simulation, developed by our Moosmosis team member Kenji from Japan, was created via MIT Scratch programming, and projects images based on concave and convex lens.

For more about our interactive simulation, check out our special interview with our Moosmosis team member Kenji from Japan here!

Wizards? Magic with Math? Potter’s spectacles and thin lens physics? If you enjoyed this educational post, please support our open-access youth education initiatves at our Moosmosis Facebook page! Like our page! 😀